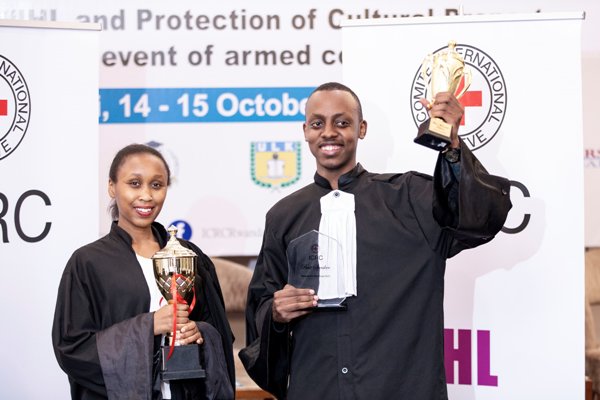 A moot court is an extracurricular activity in which law students take part in simulated court or arbitration proceedings.

The 5th edition of the moot court contest, backed by Rwanda Red Cross and International Committee of the Red Cross (ICRC), aimed at increasing awareness and interest in International Humanitarian Law in the country’s academic circles.

The competition saw Université Libre de Kigali (ULK), Samuel Ngoga and Denise Isimbi  emerge winner after defeating University of Rwanda’s Buzigi Derrick and Phoebe Kayitesi, for winning the competition the duo will represent Rwanda at all African moot court competition that will take place in Kenya.

The two-day contest saw students form the teams each playing the role of prosecution and defence in a simulated war crimes trial. 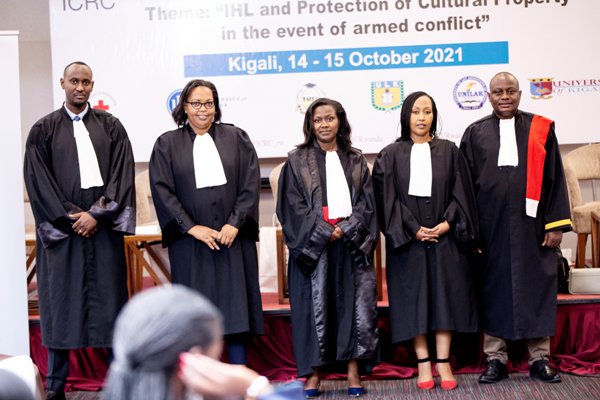 Law experts were the judges of the moot court competition

According to the judges, competitors were rewarded marks in consideration of different aspects, including knowledge of Facts  and Statements of Legal issues, presentation and Organization of ideas and arguments clarity, mastering principles and link to the facts, reaction to questions and persuasion and dynamism, time management, style and language, presentation among others.

“If other Institution like judiciary or even all those involved with the justice sector could organize such competitions on different topics, law students would gain experience which is critical for the kind of lawyers that we become after the law school,” Ngoga said.

On representing Rwanda at the all African moot competition in Kenya, Ngoga said they would bring the trophy home

“We will give it our best, that’s by applying the skills we’ve acquired from this competition and I can assure you we will win the contest,” he assured.

The ICRC head of Kigali delegation Yann Fridez said that “IHL is at the core of our Mission or Mandate. Although international humanitarian law predates the ICRC, the role that we have played in shaping it over the last 158 years is important.  Soon after its creation in 1863, the ICRC pushed for the adoption of the very first convention regulating the conduct of warfare, in 1864” 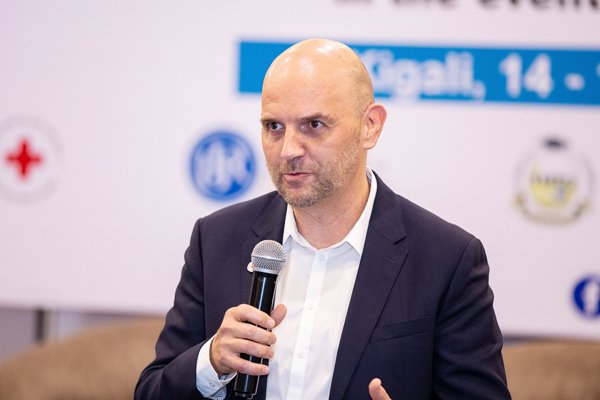 Yann Fridez, head of the International Committee of the Red Cross (ICRC) delegation in Rwanda.

“The main objectives of this competition is to develop an increased awareness and interest in IHL in academic institutions in Rwanda, to promote academic excellence in the student community, and to develop advocacy skills in an environment of friendly competition and to enhance students’ knowledge of the role of the International Committee of the Red Cross (ICRC) and Rwanda Red Cross Society.” he said.

Among notable guests that graced the final included Justice Muyobooke Karimunda Aime who represented the Chief Justice, Amb Guillaume Kavaruganda representing the Minister of Foreign Affairs, Mr Julien Gustave Kavaruganda, the Rwanda Bar association president and heads of school of laws that took part among others.