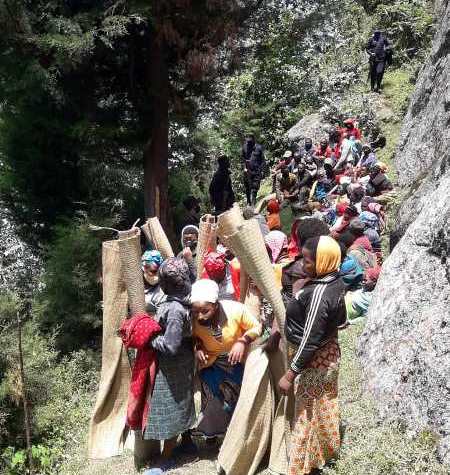 At least 62 people were on Saturday, April 17, arrested in Bigogwe Sector of Nyabihu District for holding a prayer gathering contrary to the government directives on preventing the spread of the COVID-19 pandemic.

Police and local leaders found the group congregating in a cave located in Gaturo Village, Rega cell of Bigogwe Sector.

The group was led by one Pastor Claude Samvura from Kanzenze sector in Rubavu District, who is among the arrested violators.

The majority of them were found either without face mask or wearing them badly.

The Executive secretary told the violators that conducting such gatherings undermines the government efforts against the pandemic.

“The country is still registering new Coronavirus infections and people are dying. One of you could be infected and that would be easy to infect all of you,” Tebuka said.

He warned that local authorities will continue to work with security organs to penalize anyone, who disregards the government prevention guidelines.

“We received information that there is a big group of people congregating in the cave and that it was not the first time. Police and local leaders went there and found them in a cave under a big rock. Besides holding a prohibited gathering, being in that cave itself was very risky,” the DPC said.

He appealed to everyone to comply with the directives and go to authorized places of worship instead of putting their lives in danger. (End)